The real voyage of discovery lies not in seeking new landscapes, but in seeing with new eyes.  Marcel Proust

DIALOGUE – Presence – Theory U
a foundational principle and practice of many methodologies, originally proposed and inspired by David Bohm 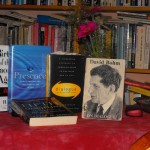 Common to all the above methodologies is that they are based on dialogue.  Dialogue is not about being right or wrong but rather of together exploring the question or issue.

Prof. Emeritus, David Bohm in the 80s initiated the collective inquiry, a movement of approaches and thinking together by which – as he puts it – the collective consciousness of human culture may well change, emerge into a new unfolding presence that may become the foundation for our new, emerging culture.

“Dialogue” comes from the Greek dialogos: Logos means “the word”, or “the meaning of the word”, and dia means “through” (not two—a dialogue can be among any number of people; even one person can have a sense of dialogue within him-or-herself if the spirit of the dialogue is present).
The image this derivation suggests is of a stream of meaning flowing among us and through us and between us—a flow of meaning in the whole group, out of which will emerge some new understanding, something creative. When everybody is sensitive to all the nuances going around, and not merely to what is happening in one’s own mind, there forms a meaning which is shared. And in that way we can talk together coherently and think together. It is this shared meaning that is the “glue” or “cement” that holds people and societies together.
Contrast this with the word “discussion”, which has the same root as “percussion” and “concussion”. Discussion really means to break things up. It emphasizes the idea of analysis, where there may be many points of view. A great deal of what we call “discussion” is not deeply serious, in the sense that there are all sorts of things held to be non-negotiable, untouchable, things that people don’t even want to talk about. Discussion is like a ping-pong game, with people batting the ideas back and forth in order to win the game.
In a dialogue there is no attempt to gain points, or to make your particular view prevail. It is more a common participation, in which people are not playing a game against each other but with each other. In a dialogue, everybody wins.

In dialogue, the following practices are useful and can radically shift the quality of the conversation, whether with one person or practiced in a small or large group.

The key competencies are the ability

To suspend judgements, assumptions and certainties – It is not about knowing who is right or wrong.  It is about exploring together and surfacing what we do not know or see yet.
To listen with a passionate mind of curiousity.
To speak from your assumptions rather than your certainties.
To search, inquire into your own assumptions held by the collective you belong to.

Thus you may become able to move towards generative co-thinking instead of just download from your memory store of your reactive mind. This process opens up new pathways for co—creation, innovation and a holistic understanding enhance by a compassionate heart. 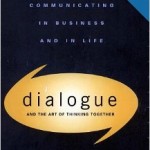 David Bohm’s proposal was deeply heard by William Isaacs at MIT, Sloan School of Management, who int he early 90s initiated a 2 year project: Dialogue Facilitators’s Project to inquire into the possibilities how Generative Dialogue may be applied in Strategic Conversations. The group, of which Juanita Brown (TWC co-founder) as well as Agota Ruzsa (founder of wisdomweavers.com and applying deep dialogue to collective healing) were members of, came together 4 times for a week for 2 years to work on princeles, guidelines and practices of such dialogues. The outcome were the book, as a summary of our collective experiences and metalearning. 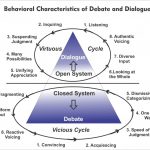 This process and understanding of dialogue vs. debate was generatively inte 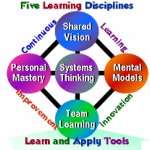 grated in the understanding of systems dynamics and the new, upcoming psychological processes as well as contempklative and mindful practices and thus leading to the principles and methodologies of Learning organizations and its further research and co-generative dialogues led to books, like Presence and Synchronicity as well as later as a comprehensive follow up came Theory U. 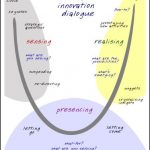 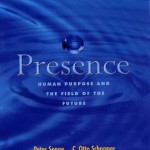 Thus, combined and applied at MIT, OLC of Sloan School of Management, they have reinvented organizational and societal transformation and attracted many to co-create their respective fractal communities of practice, under the name Global SoL (Society for Organizational Learning) and Presencing hubs worldwide, as well as the upsurge of The World Cafe communities and Art of Hosting regenerative networks.

This is a silent r/evolution of human consciousness moving us towards the times of Holos from the age of Logos. As Ervin laszlo states in many of his books, the cosmic intelligence is emerging in our human inetrelated, „interbeingness” that is emerging through our intentional dialogues based on holistic parnership, cultivated mindful awareness, cognition, communication and community.